AGAIN, Does anyone else need an approval???

THIS… would be why I have to stop allowing some of ya’ll to entertain me!!!

1.  If “We’re in this TOGETHER”… then WHERE exactly have YOU and the “For All Agenda” folks… my “Crew”, Frenemies and Enemies been FOR THE PAST TWELVE (12) LONG YEARS, while the Civil Rights Era “leaders” and their handlers were destroying my life… and that of my child’s life… and that of millions of other lives these past SIXTY (60) LONG YEARS and / or using me, my child, Spencer, Natural Leaders within the African American Descendants of Slaves Community and   Other African American’s as collateral damage, in exchange for elevating the “For ALL Agenda”, other Communities and a handful of Black Elites??? SMH…  I can’t with you or the “For All Agenda” … Bait and Switch Sales People or Sales Pitches!!!
2.  If you are a Natural Leader within the African American Descendants of Slaves Community… STAY FOCUSED and continue to lead by example, with good character, high integrity and un-wavering Values – WORKS!!!
Like I said… No, I am not going to change the 21 Enumerations of Error, which is based on clear-cut, un-resolved… lingering (for not just the past 12 years, but for centuries) Habeas Corpus / Civil Rights Violations and / or historically proven forms of racism, systemic oppression and rampant corruption in our most vital “systems”, which has had a negative impact on my life and that of other African American Descendant of Slaves… FOR CENTURIES!
As a reminder, the un-resolved 21 Enumerations or Error and / or the EXISTING – mandated, controlling and intervening questions of law – error’s, which the US Supreme Court has ALREADY seen / accepted (Docketed)… twice before and will finally provide a ruling on via Order and Judgement of the court WILL NOT BE ALTERED or CHANGED by me and I am the only one that controls the cases or has the authority to speak on my behalf or make adjustments to this or anything else related to the cases, including who is, who will be added or who will remain and Et Al Defendant in the cases.
I’ve already mentioned the word CENTURIES, which encompasses current and defunct HBCU’s… which have been in existence for Centuries ONLY.  I’ve also clearly used the words… Earmarked or Direct Payment Funds, which means NO FUNDS are intended to now or EVER again go through ANY organizations… AND once again, I will not be changing the 21 Enumerations of Error, which the US Supreme Court has already seen and accepted (Docketed) to accommodate the ASKS / Whims of Other Communities or even African American Descendants of Slaves… who are putting forth bait and switch asks that are ultimately intended to provide help and support for other communities.
In quick summation… NO, that wasn’t me either!!!  Again, YOU would hear from me directly, when and if there is a relevant Ask, as supported by the existing 21 Enumerations of Error in the Windsor-Spence US Supreme Court cases.
Like… YOU SHOULD KNOW ME and my Asks by now… so there really is really NO NEED for anymore retaliatory attacks. AND like I said, Direct ALL of your disdain to the Black Folks pictured / featured in The Hill’s below photo, likely the Sales Person at CAU (Also Controlling the UNCF), Butterfield and Alma What’s her name, instead of me… that wasn’t me!!!  Like I’m pretty clear about my Asks.  I say what I mean. I mean what I say. I meant what I said…. AND I don’t participate in forums, meetings, round table discussions, etc.  My personal rationale is… if you have to ask, you don’t know.  In as much, I only work with Natural Leaders within the African American Community who have PROVEN… good character, un-wavering values and high integrity – experienced WORKS.
Again, if other Communities or even the For ALL Agenda representatives from the African American Descendants of Slaves community.. who are so desperate to keep their jobs that they have stooped to using bait and switch tactics and handler antics… would like to Ask for help for other communities (Directly or Indirectly… Again, I’m not dumb. I know what you are doing. Plus I know the game.), without riding the Backs of African American Descendants of Slaves, they can do so by filing an Amicus Brief in Support of the Windsor – Spence cases with the specific detailed ask that they would like for their own personal community… along with the supporting evidence / rational as to why the US Supreme Court should grant their ask.  I.e. That they have NEVER received ANYTHING, not even a red cent from this nation on behalf of their Community… FOR CENTURIES, as is the case with the African American Descendants of Slaves Community, individually and collectively.
Again… like a BROKEN RECORD, If you have sacrificed NOTHING and given NOTHING… you should EXPECT NOTHING from African American Descendants of Slaves Natural Leaders, especially NOT ME!!! I don’t care who you are… I don’t owe you!!!  We don’t owe you!!!  I can’t be any clearer… RISK YOUR OWN LIVES FOR BULL, NOT MINE… MY CHILD’S OR OTHER NATURAL LEADERS IN THE AFRICAN AMERICAN DESCENDANTS OF SLAVES COMMUNITY!!!  That wasn’t me either!!!
Reference: 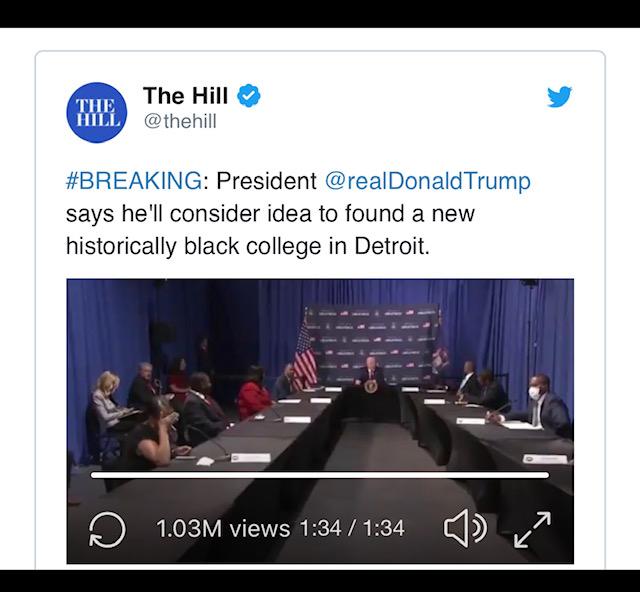 YOU are NOT BLIND or DUMB and I have no idea why YOU “Feel” like you are entitled to additional Whitesplaining after (minimally) TWELVE (12) long years of me using my own – personal, real life experiences to ”teach effectively” with “ authentic communication”.
LOL… Continue to listen to sell-outs and individuals with no-real life experience… who have sacrificed NOTHING, GIVEN NOTHING and should therefore expect NOTHING from natural leaders within the African American Descendants of Slaves Community, especially NOT ME… ALL you want.
Again, the bottom line is that I don’t owe YOU. We don’t owe YOU… so feel free to Stay Mad ALL you want in your lane. Otherwise expect to be non-violently and un-apologetically Slaved and Dragged… because I’ve already told you time and again that the Adult version of Cayden’s Kindergarten No-Bullying Policy applies.
And so at this point, Hit Repeat on the most recent political campaign video that just happens to be an authentic expression of my actual real life experiences… as well as real life, which would NEVER in a million years be acceptable for YOU, White Women or any other race of people, Man or Women.
Real Talk 💯 FACTS…
Kimberly
Title: Spencer Mom… A MOTHER, HIS MOTHER then, Right NOW and ALWAYS!!!
________________________

Thank you!  Yes, I saw it and I’ll provide feedback and / or respond later.
There is an opportunity for growth, DEFINITELY!!!
However, at present… based on mentoring, THAT response is a THOUSAND PERCENT better than the later.  In as much, it’s simply a sign of improvement and / or that they are working to reach, teach and rebuild…
And don’t rush me for a response.  This is my Full Time, Un-PAID VOLUNTEER JOB!!!  I’ll double back on this topic when I’m ready…
Doubling back to “Zen”
What you just experienced is called a “Slay & Drag”… a combination of two terms.
When someone from our community tells you in words or actions that they are Tired and / or that they have had enough of your actions or words and they have already explained their position… you may choose to continue to push them if your want, but don’t be surprised if you are cursed out and / or in yesterday’s example… non-violently Slayed & Dragged.
We do not share the same traditional culture, speak or means of communication. Stop trying to force our MANY CENTURiES old culture to assimilate, morph or fit itself into the White People privilege box that you FEEL we should choose to fit into.
I don’t OWE YOU… WE DON’T OWE you our Lives… our Children… our Families… our Communities… our HBCU’s… our Finances… our Resources… our Skill’s… our Gifts… our Talents.. our Purpose…
“I don’t even owe you yet another explanation, STAY MAD”.
Do you remember not only the use of my words, but my actions???  Right!!!
Do you remember me stating that the Adult, Non-Violent Version of Cayden’s Kindergarten No Bullying Policy Applies???  Right!!!
I’ve said… “Get off our backs” in so many different ways… for quite a number of years.
So let me repeat the above position once more…
I don’t owe you!!! We don’t owe you!!! You have sacrificed NOTHING.  you have given NOTHING.  You should expect NOTHING from Natural Leaders within the African American Descendants of Slaves Community, especially not me!  Instead of looking to me our Natural Leaders within our community for Help, point your thumbs at yourself, instead of your fingers at me or anyone else.  I’ve helped you… I’ve even provided you with my time via paid positions, countless volunteer hours and a plethora of resources, to help your community become independently successful… on YOUR OWN without assistance from me FOR YEARS, which is much more Grace and Mercy than I EVER received from you, other communities or even select members of my own community.  You are NOT ENTITLED to anything more from me.  If you choose to continue to force your Agenda on me or other Natural Leaders within the African American Descendants of Slaves community… then you can continue to expect to be non-violently Slayed & Dragged… because I / We are T.I.R.E.D. of you, we’ve had enough of you and the application of your Communities requested Agenda, which has absolutely nothing to do with the African American Descendants of Soaves Community or our Agenda… AND so now the Adult, Non-Violent Version of Cayden’s Kindergarten No Bullying Policy Applies!!!
With our communities lead by example approach to teaching you Boundaries… and finally the application of even the smallest margin of Critical Thinking Skills… hopefully you’ll finally get the hint to leave us alone and / or recognize that it’s waaaayyyy past time for you and your community to “Get off my / our Backs”.
Happy Sunday!!! “I’m handing out life lessons” – Cayden
Kimberly
Title: Spencer’s Mom… a MOTHER, Spencer’s MOTHER then, RIGHT NOW and Always!!!

In the spirit of transparency, here’s my response to additional Rebuttals…
This just popped up as a Social Media Memory. 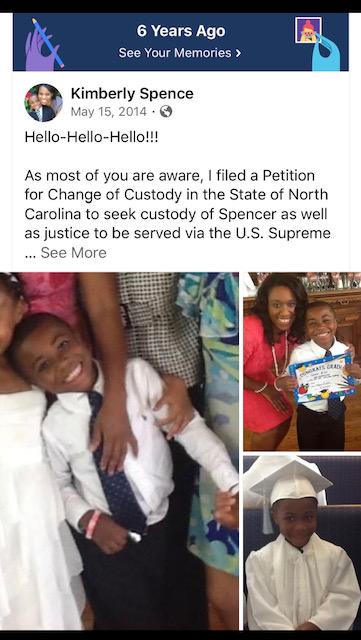 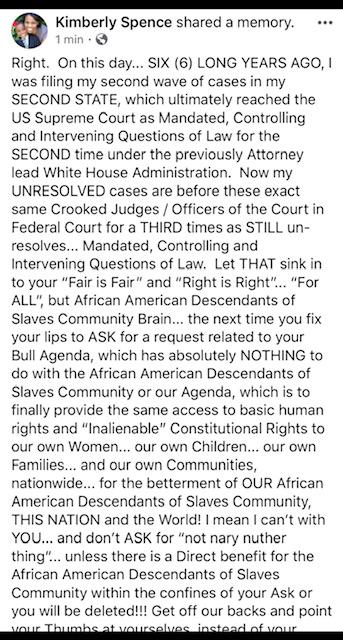 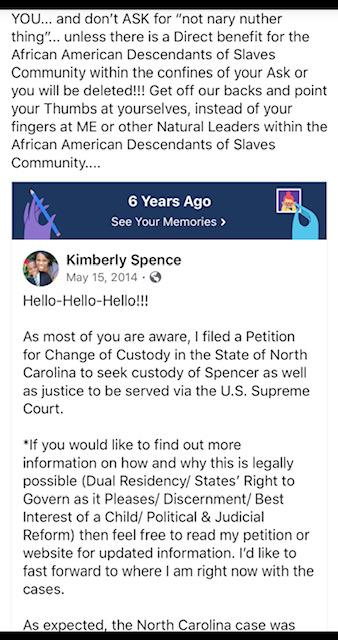 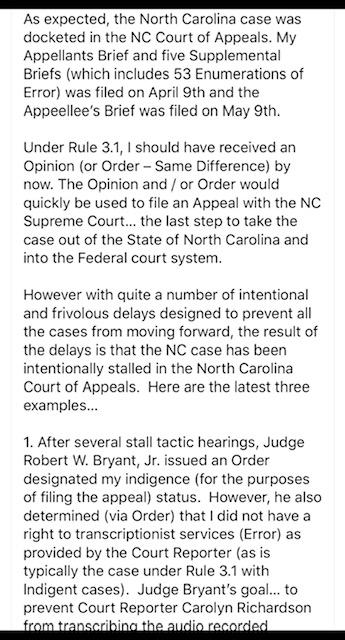 Hello Everyone!!!
Below is my public communication as released to the Et Al Defendants and the public!

1.  Right!!! You did your research (you know my professional background) AND you were paying attention!!!