I decided to release a recent threatening and intimidating…

This update is rather long so be sure to scroll through the update headings to reach the topic of your desired choice.

Want to help with the create awareness campaign?  Please tweet, Retweet, Post or even email this message…

Okay, on to the case update without interpretation. I’ll save that for a later date.  This update is simply intended to provide national insiders a heads up on what’s coming down the case pipeline, before the information reached the general public.

One Recent Audio Recording Originating from New-Additional Year 2019 Court Filings under a Brand New Year – SEALED, 2019 Case Number at the Fulton County Georgia Courthouse, where I have been banned from filing or responding to any cases (subpoenas, petitions, motions, response motions, cases, etc.) Since Year 2013 and / or have had absolutely no legal way of defending myself against the erroneous and fraudulent charges filed against my by my Criminal Defense and “Family Law” Attorney ex-husband, in continued attempts to have me fraudulently and erroneously incarcerated again.  Click here to listen to the recording…

Wake County, NC Submission Cover Sheet, which lists all open court fillings that the Judge will rule on “immediately”, based on the Staff’s requested Proposed Order. 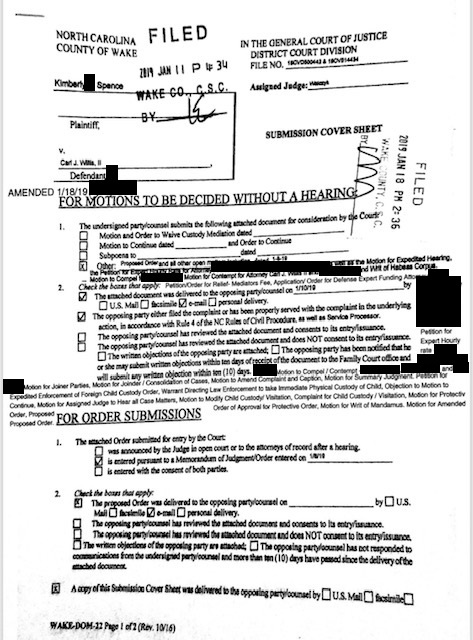 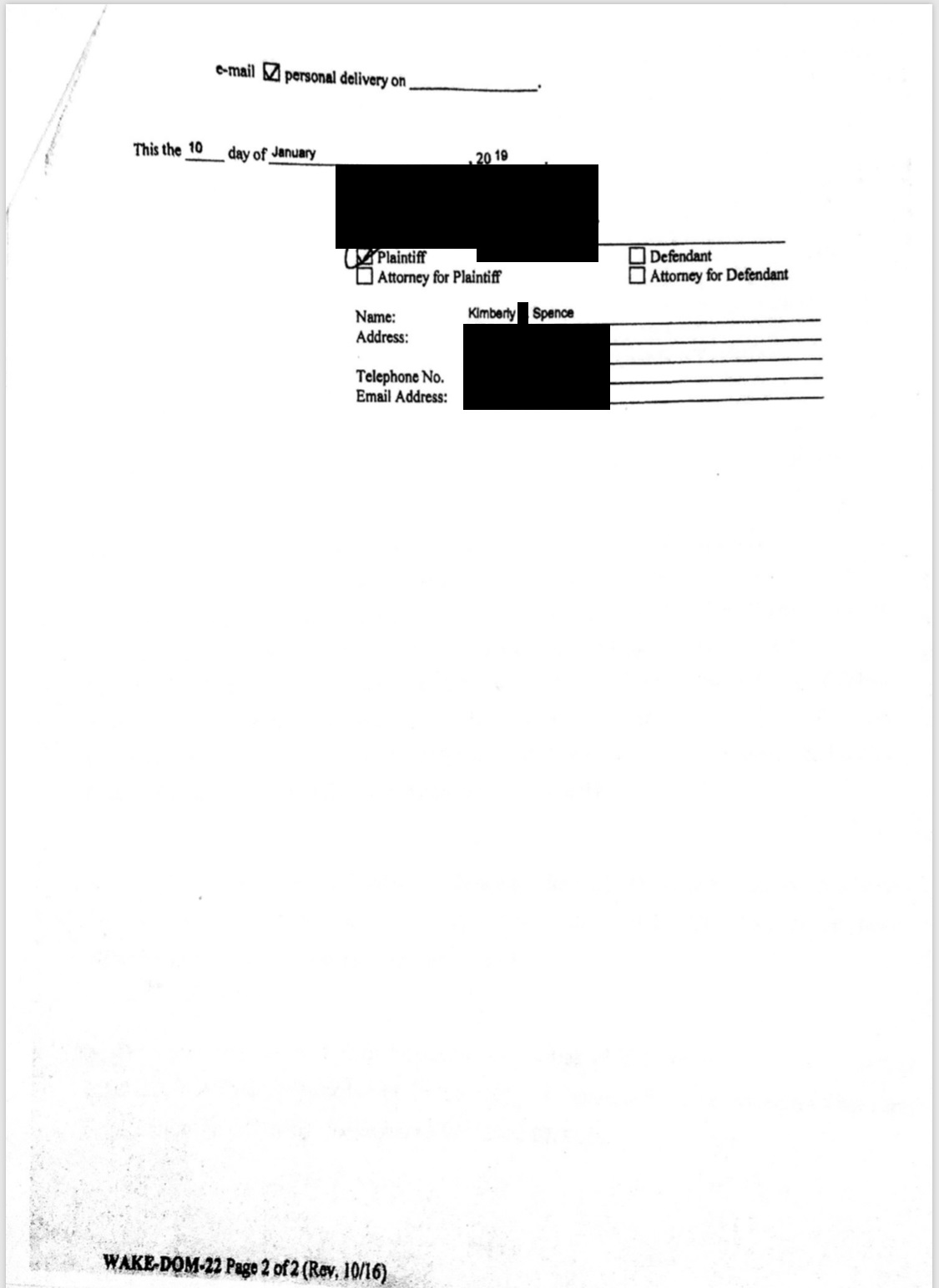 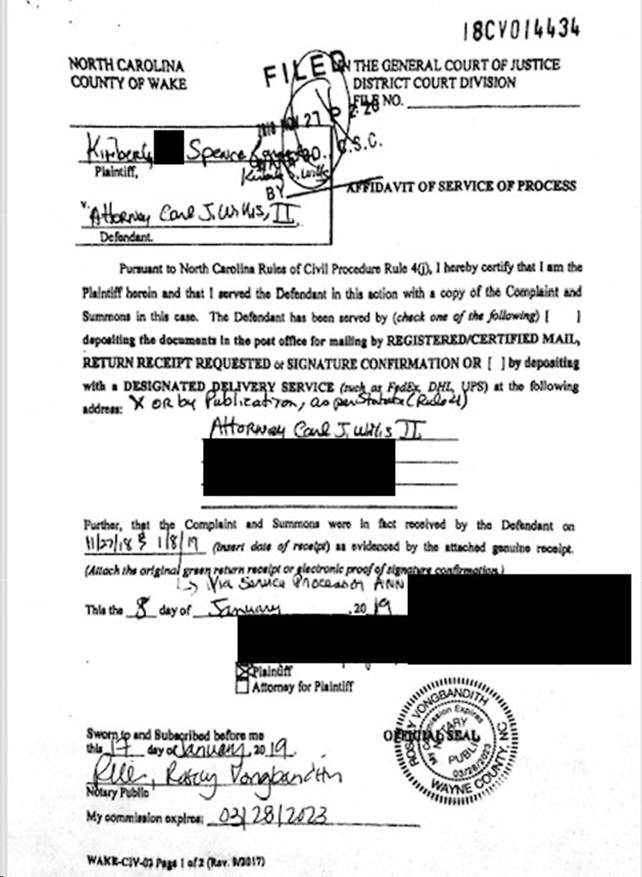 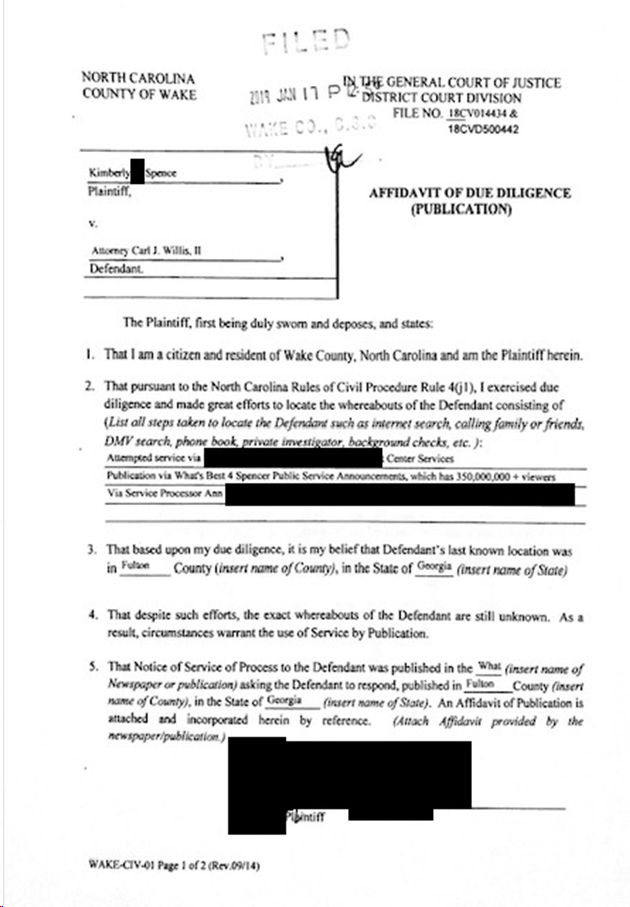 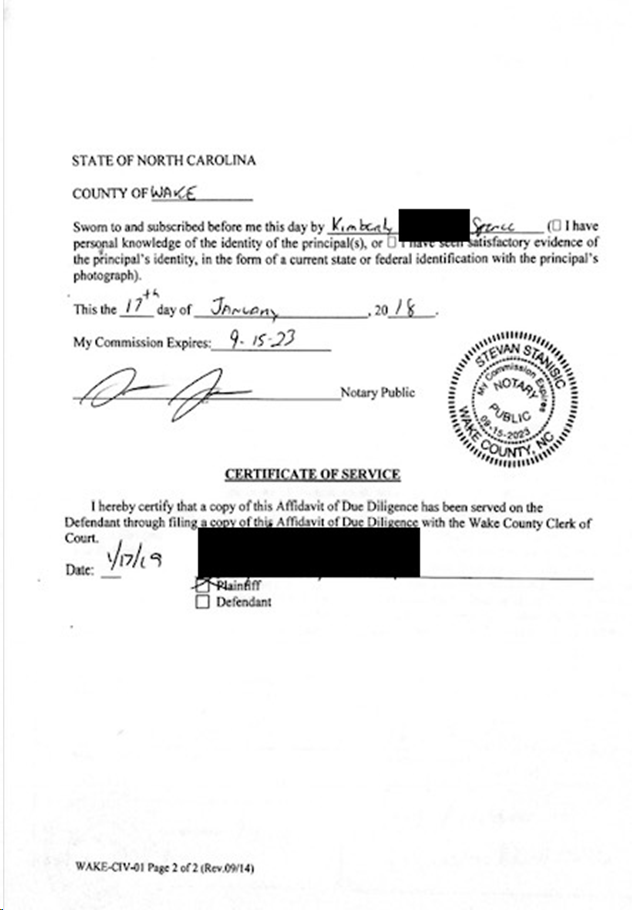 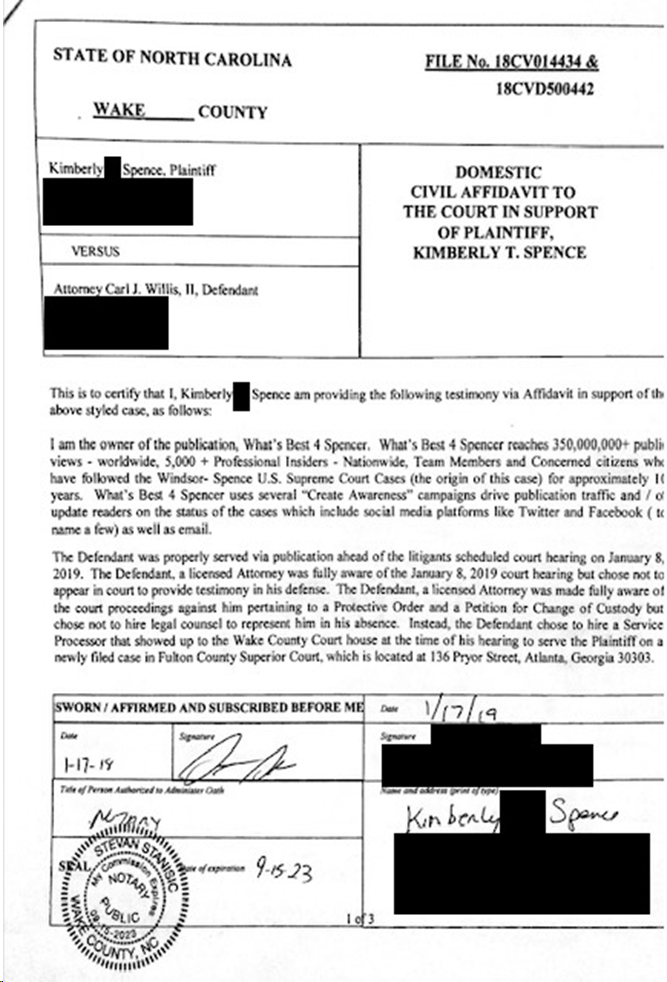 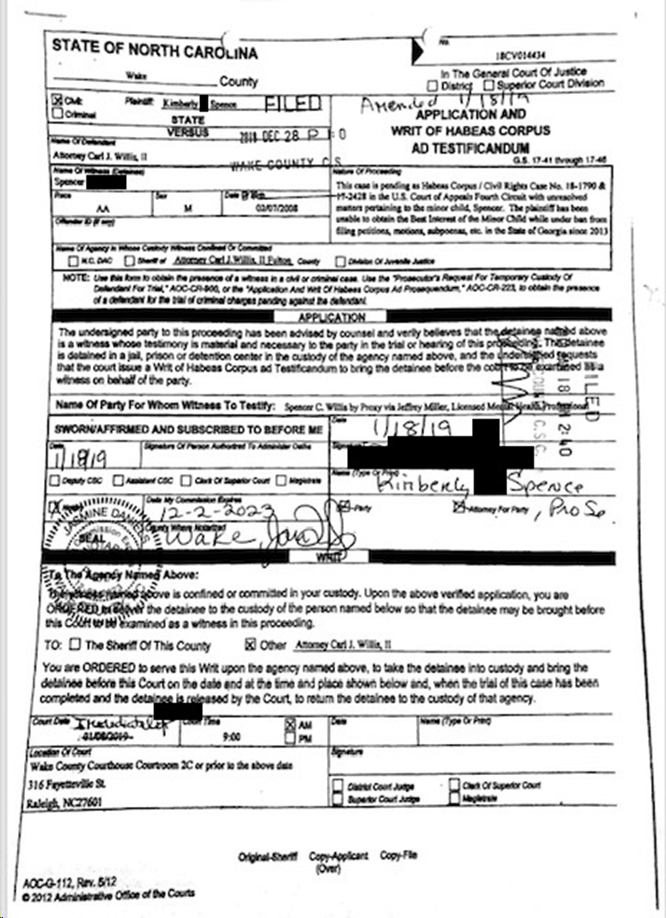 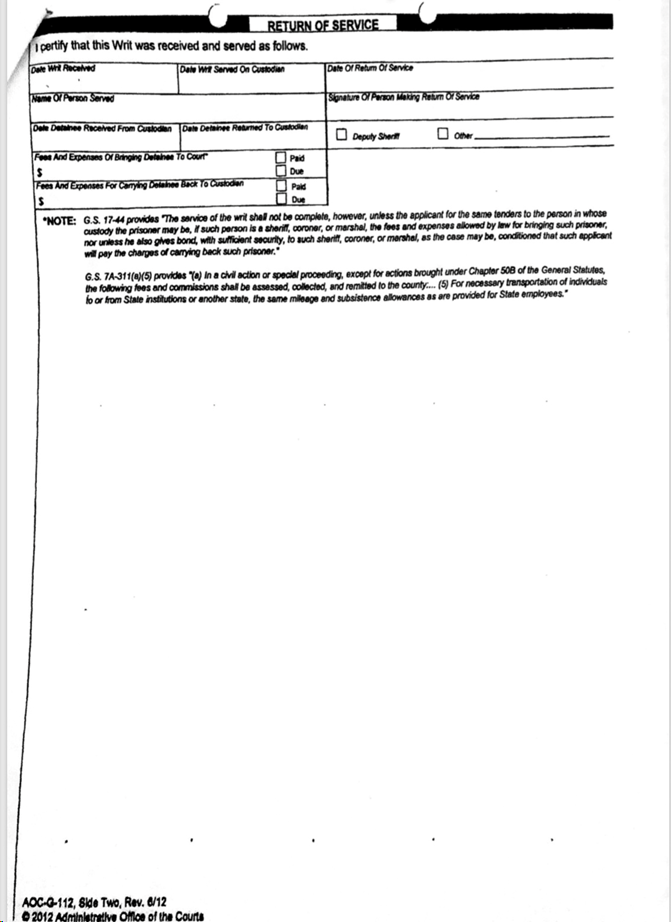 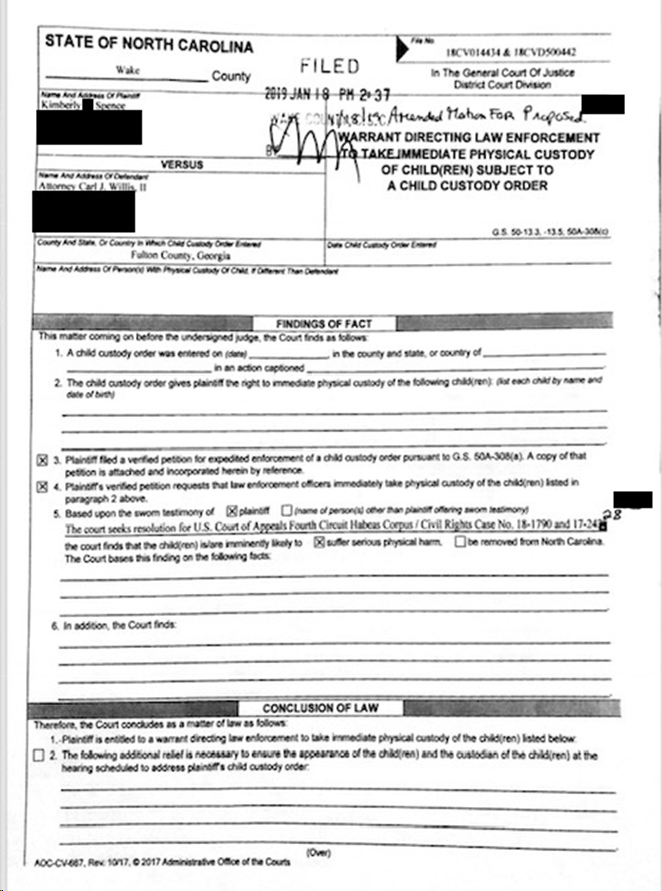 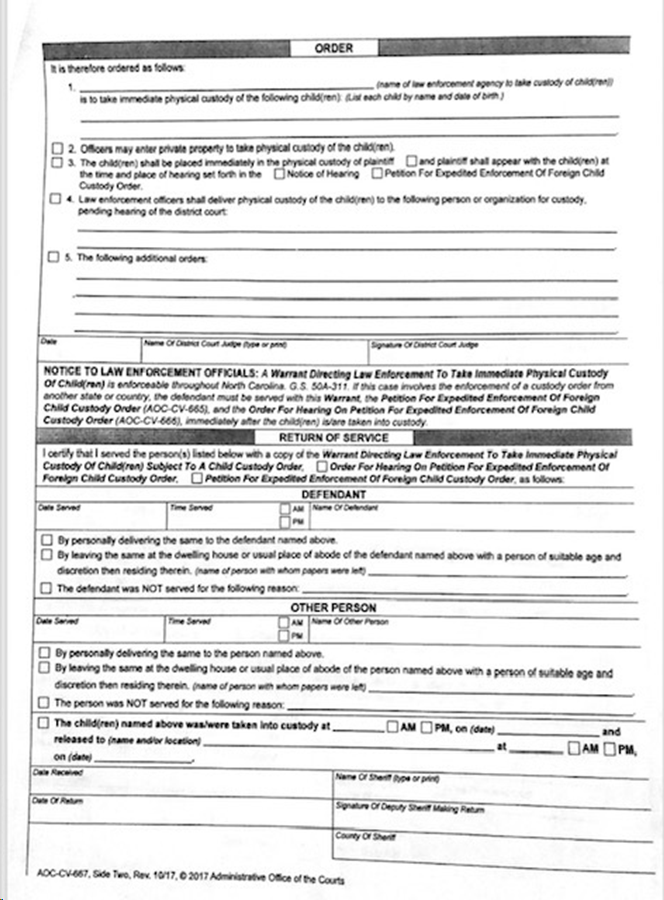 Also, I decided to forgo the whole State and Federal legality issue with ensuring that “All” citizens have access to their “inalienable” constitutional rights and were considered innocent until proven guilty. It’s official!!!  I completed my intensive 5 Session Mental Health Evaluation by a professional who has over 40 years of experience and is licensed in 5 States.  Not surprisingly, I’m not mentally insane!!! 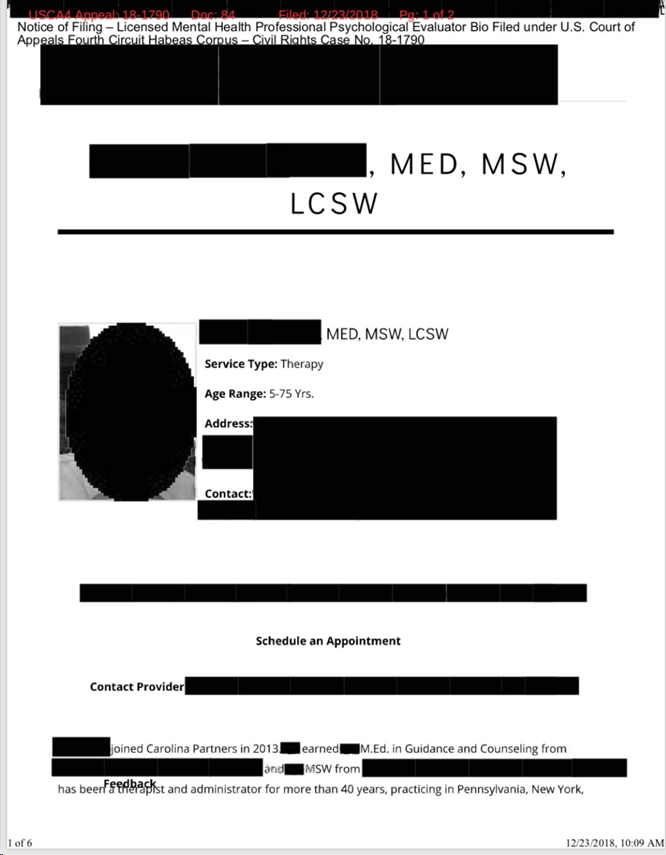 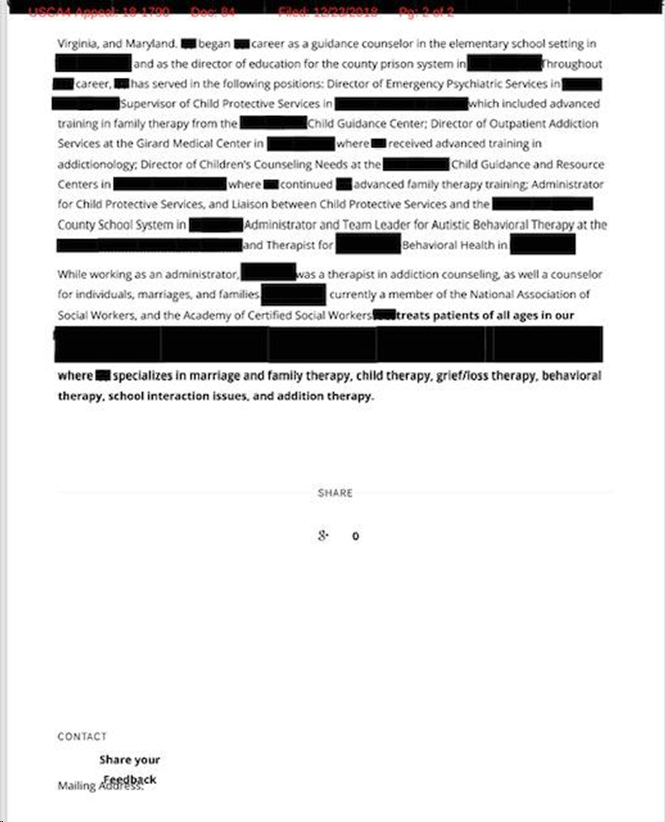 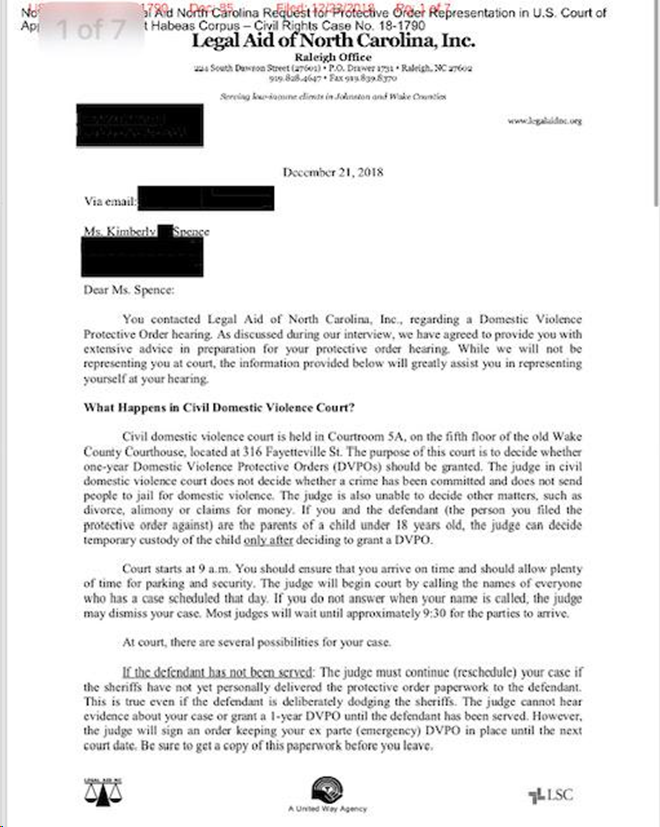 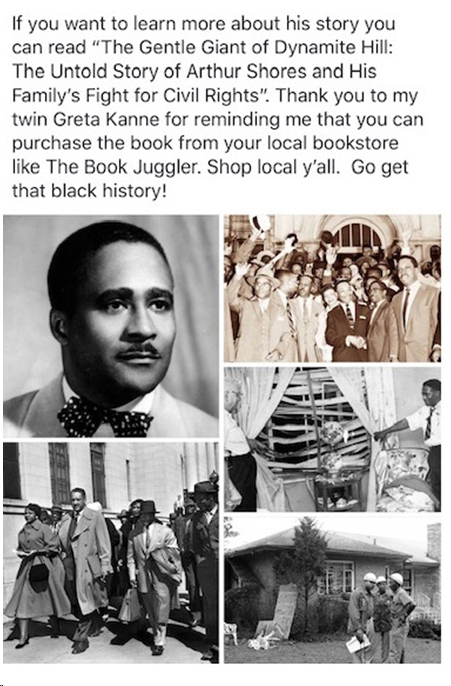 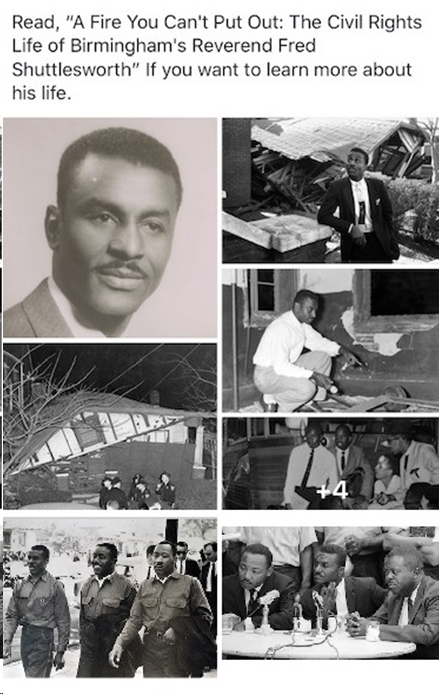 2.      Special – Special thanks to the lovely ladies of Alpha Kappa Alpha Sorority, Inc. (Thank YOU!!!), under the new leadership direction of Dr. Glenda Baskin Glover (Thank YOU!!!) for not only choosing to “Stand with Bennett” ($100,000 Endowment), but with 32 other HBCU’s during Black History Month with a  generously donating $1.6 Million in Endowments to HBCU’s across this nation.

4.      Special- Special thanks (as always) to Dr. Kenya Barris (HBCU – AUC – Clark Atlanta University, established 1865 (Atlanta University) / 1869 (Clark College) and Consolidated 1988. Thank YOU!!!), writer and Producer of Black-ish along with the entire cast and staff (Thank YOU!!!)... as well as ABC Network (Thank YOU!!!) for creating, portraying and releasing such a powerful message on “Colorism”. Recognizing and fostering an understanding of the type of healing that is required within the African American Descendants of Slaves community and this nation is key to moving the needle a step closer to an equitable society.  If you haven’t watched Back-ish Episode S5 E10 “Black Like Us”, click here… https://abc.go.com/shows/blackish/episode-guide/season-05/10-black-like-us

5.      Special- Special thanks to the artists, volunteers and contributors (Thank YOU!!!) who helped make artist Fabian William’s (Thank YOU!!!) Kaeperbowl a HUGE success!!!

Because this school matters deeply to me, the entire AUC (Atlanta University Center), the survival of HBCU’s in general and the African American Descendants of Slaves Communities that benefit the most from gifted alum who return to disenfranchised communities to selflessly serve the underserved!!!

In fact, merely mentioning that Alberta Williams King is the Mother of Dr. Martin Luther King, Jr. should be enough to spark at least one of two large donor / supporters into stepping forward to help (in any way that they can and see fit) to fully revitalize this more than 100-year-old HBCU into its formidable, glory years.

Abridged version of a recent Communication to African American Descendants of Slaves.

*Please note that this message to African American Descendants of Slaves includes the “Use of Terms” and traditional speak, fused with grammatical and spelling errors.  I am a writer and not an editor.   Be sure to also research the history of the “Use of Terms” in the African American Descendants of Slaves community to gather further incite on the rich historical perspective of our cultural dialect.

Just a reminder that again, YOU taught me that “business is business”!

So if you can dish it out, you certainly can and should be able to legally and non-violently take it.  Now let that sink in as an un-refutable and “therapeutic” reminder and / or lesson learned… again and again until the message / understanding sinks in.

“For years now I have heard the word “Wait!” It rings in the ear of every Negro with piercing familiarity. This “Wait” has almost always meant “Never.” We must come to see, with one of our distinguished jurists, that “justice too long delayed is justice denied.” ― Martin Luther King Jr., Letter from the Birmingham Jail

“I must make two honest confessions to you, my Christian and Jewish brothers. First, I must confess that over the past few years I have been gravely disappointed with the white moderate. I have almost reached the regrettable conclusion that the Negro’s great stumbling block in his stride toward freedom is not the White Citizen’s Counciler or the Ku Klux Klanner, but the white moderate, who is more devoted to “order” than to justice; who prefers a negative peace which is the absence of tension to a positive peace which is the presence of justice; who constantly says: “I agree with you in the goal you seek, but I cannot agree with your methods of direct action”; who paternalistically believes he can set the timetable for another man’s freedom; who lives by a mythical concept of time and who constantly advises the Negro to wait for a “more convenient season.” Shallow understanding from people of good will is more frustrating than absolute misunderstanding from people of ill will. Lukewarm acceptance is much more bewildering than outright rejection.”
― Martin Luther King Jr., Letter from the Birmingham Jail

“More and more I feel that the people of ill will have used time much more effectively than have the people of good will. We will have to repent in this generation not merely for the hateful words and actions of the bad people but for the appalling silence of the good people.”
― Martin Luther King Jr., Letter from the Birmingham Jail

“My friends, I must say to you that we have not made a single gain in civil rights without determined legal and nonviolent pressure. Lamentably, it is an historical fact that privileged groups seldom give up their privileges voluntarily. Individuals may see the moral light and voluntarily give up their unjust posture; but, as Reinhold Niebuhr has reminded us, groups tend to be more immoral than individuals.”
― Martin Luther King Jr., Letter from the Birmingham Jail

Further, the self-appointed positioning and / or elevation of yourself into your current position is obviously not your anointed – sanctified – filled with the Holy Spirit, calling!

Not only that, you are not a Deborah, based on your un-willingness or inability to couple actual, real life works with faith…

You also do not have ANY real-life experience…

You obviously do not have the capacity to understand what’s really going on within the African American Descendants of Slaves Community… as it relates to racism, systemic oppression and rampant corruption in our most vital systems of government…

You certainly do not have a proven track record of meaningful service and / or helping to counter the African American Descendants of Slaves Family and Community enemies, let alone that of your supposed “sisters”… as “sisterly” as I can and am willing to say to the likes of you.

Please have several seats and stop entertaining us “All”!

Seriously, there is no need to try… NOW to lead by example, with good character and un-wavering values… I / we see who you really are and I / We believe you and your proven track record and / or “works”!!!

I mean I have absolutely no idea where all of the majority of the “sisterly” – “sister” members and even non-members of the Black Greek Letter organizations have been over the past 50 years, let alone these past 8-10 years as your professional colleagues and political “friends” threw me and my child underneath the bus, sat around and sipped tea as well as made excuses about what was really going on behind the scenes in our communities… AND of course all while enriching yourself personally and elevating yourself professionally and politically… AND not to mention, “ALL” while advancing other community political agendas, which (again) have absolutely nothing to do with the African American Descendants of Slaves community agenda.

Let’s be clear, you are either a follower or you are a natural leader, but you aren’t and can’t be both at the same time!

Those of you who are proven followers who operate with bad character, wavering values and no integrity, I / We See you.  Have several – several seats so that natural leaders can rise above you and take their rightful place as respected leaders in our community and this nation.

Together we can continue to transform our families and our communities for the betterment of ourselves, our families and the United States of America!!! Thanks and God Bless America and the progressive future of this nation!!!

Moving on to a lighter note, Cayden’s (Thank YOU!!!) Kindergarten No Bullying Policy.  As adults, the principals in this video can be used and applied as morally sound, non-violent strategies and / or tactics designed to help combat adult bullies and / or corruption…

Oh and if you are wondering, Luke 6:31… Negative Injunction, emphatic AND Responsive… Research!