THE Clark Atlanta University apparently now has a new President and I (of course) have a “few” critical thinking questions that will not only impact the trajectory of building upon CAU’s storied history and legacy of leadership in works and / or service (Reference our Motto’s), but the trajectory of HBCU’s in general as CAU (by default and obviously not seasoned “leadership” choice.) is currently leading by example to help rebuild our devastated communities, nationwide.

I certainly contend that while a changing of the old guard, as controlled by Civil Rights era “leaders”,…

(Responsibilities include, but are not limited to…

…since Dr. King’s death has been painful, it has been necessary. The proven results and / or the State of our African American Descendants of Slaves rural and inner cities are not ambiguous.  There is now a proven record dating 65 long years, which points to the “success” of the previous generation’s theory’s on best practice leadership approaches and / or their choice to push forward agenda’s that have absolutely nothing to do with the development and advancement of the African American Descendants of Slaves Community.

In as much, it is the full intent of Natural Leaders within the African American Descendants of Slaves Community to continue Leading By Example, with Good Character and Un-Wavering Values to advance the African American Descendants of Slaves Community and its agenda, with or without the old guard and / or Civil Rights Era “leaders”, who quite frankly have or will be dying off soon…. THANKFULLY!!!

We, as in We the People and / or Naturally Leaders will continue our work with or without the old guard to help usher in a new error of transparency, humanity, cultural preservation and purpose…

We, as in We the People and / or Natural Leaders will transform this nation, one person… AND one community at a time…

We, as in We the People and / or Natural Leaders will create a the better America that we All desire to live in, right now for the betterment of ourselves… our children… our children’s-children… the African American Descendants of Slaves Community… our States… this nation and the world.

Be on the lookout for the “Clarify, please… Madame or Mr. President Post”.

Moving on to yet another reminder…

For some reason there appears to be additional confusion about my motives for continuing not only the Create Awareness Campaigns, but the Federal Court cases in general.  In as much, I’d like to re-iterate the same points that I have covered over the last few years with Insiders, politician, judicial officers, etc., so that there is no ambiguity in my rationale for the cases, etc. as is simple having a desire to have access to my inalienable Constitutional Rights (as an African American Descendant of Slaves) isn’t enough….

Moving On to additional updates below…

Happy Father’s Day to all of the real Men who have stepped forward in society to provide “for All” Women, Children and Families!!!  I see you, appreciate you and thank you!!!

Continue being the powerful – positive example that you are…

Continue to be the standard…

Continue to lead by example, with good character and un-wavering values!  Again, thank you for being you!!!

It has come to my attention that I should point out a few reminders.  Here’s a Special message for the African American Descendants of Slaves community.

Your rebuttal to my response to Question X, Y or Z 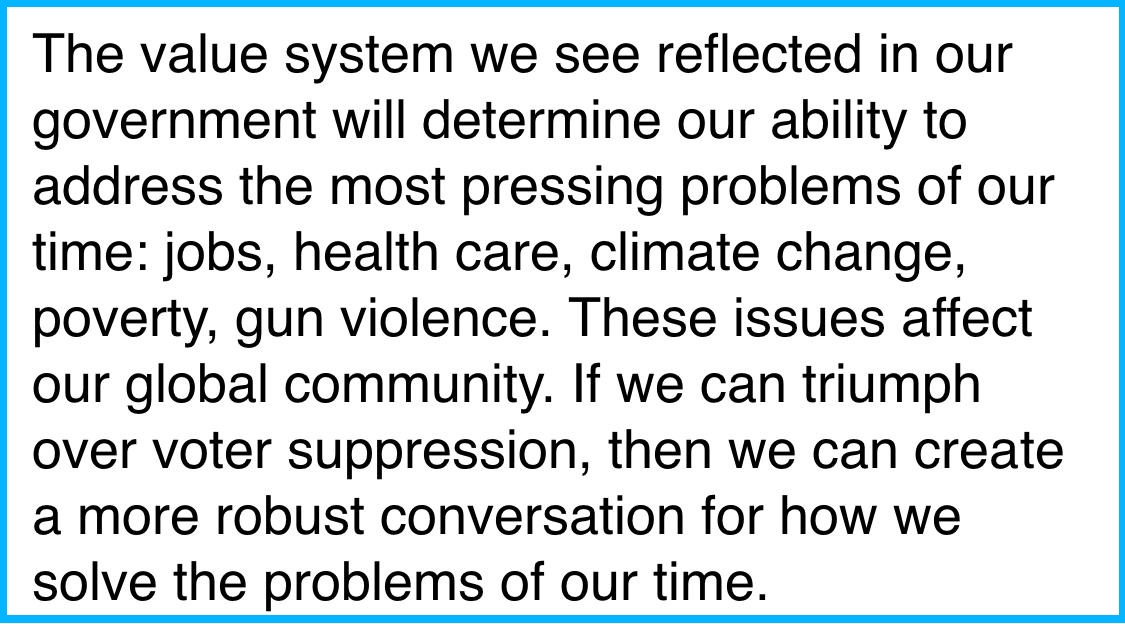 Oh and if you are saying that it IS in fact on the list or apart of your agenda… by pointing to the few goals that you have listed above… then why has it taken 50 Years (since Dr. King’s death) to “accomplish” said goals, when Natural Leaders who are not even collecting a paycheck and benefits (healthcare, pension, perks, etc.) and / or have not been voted into positions of authority are “handling business” in a mere fraction of the time that it’s taken Elite Blacks and “friends of our community” to accomplish said goals! (! not ?)

Further… why do you want to have the SAME discussion over and over again. We see your fruit and / or your measurable results by looking at the dire state of the African American Descendants of Slaves rural and inner cities and / or our communities, nationwide. We also know and understand that the state of our community and / or its viability not only impacts the well being of our women, children and families, but this nation and the world.

Like Sit down for real. Thirty is not a good look. Again, Natural leaders are leading and that’s that and / or F.A.C.T.S.

Second rebuttal to my response to Question X, Y or Z

“… when your works actually match your faith, then come talk to me.  Actually DON’T… because I’ll see your works and / or the fruit that YOU bear and will acknowledge you under the Top 5 Special – Special Thanks section of my updates.”

Also as a reminder…

“Luke 6:31… Negative Injunction, emphatic AND Responsive and / or Cayden’s Kindergarten No Bullying Policy, if you recall is STILL in effect… so go right ahead.

P.S. Last reminder…  If you have to conduct a poll or study to gather information or the thoughts of others to formulate and inaccurate opinion on any current state or “works”… in an attempt to manipulate the outcome of your preferred “leadership” desires… then you are neither…

Again, sit down so that Natural Leaders can rise above you and take their rightful place as leaders in our families, communities, States, this nation and the world.  There are and will always be paid or ego driven “statuses”, recognition’s and acknowledgments that you can “earn” under the “For All” agenda, that don’t require the continuation of the destruction and demise of the African American Descendants of Slaves Community.

As previously mentioned, Natural Leaders are working… leading by example, with good character and in-wavering values on the African American Decedents of Slaves Community Agenda for the betterment of our women, children, families, communities, States, Nation and the world…. AND…

4.    (apparently a Required Recollection)… uh, YOU WHERE NEVER CHOSEN!  Chosen folks dropped, after the conductor said “All Aboard” and began moving.  While the Train was moving , someone came up with the “brilliant” idea that a less than full train needed or should be filled.  The train was then stopped so that that individual could have the opportunity to take a second glance at all of the options that where left behind.  Obviously a flawed critical thinker, they pointed to you… because you appeared to be Godly. You then leisurely strolled towards the train, jumped aboard for less than an hour, but then decided to jump back off the train once it began moving again because you looked around and saw the standard for Natural Leaders , saw what was required of Natural Leaders to be properly groomed to be groomed and then noted the work that would be required once the train stopped at its final destination.  Self absorbing and Ego driven, you got mad at the people on the train who left you and in that moment (as a Potential REPLACEMENT for the individuals who were actually CHOSEN, you weren’t) you decided to rally the individuals who were neither called, chosen or even looked at as a last minute replacement – ditch effort to fill the train with Natural Leaders.  Those who know and understand our history know why, but STILL the notion was a bad idea, given the hindsight results.  Just let THIS… that be a clear lesson learned when selecting Natural Leaders to lead in the future.

6.   YOU CHOSE NOT TO ANSWER THE CALL and other Natural Leaders (due to your bad character and wavering values) have risen above you to take their rightful place as leaders.

7.   YOU CHOSE NOT TO ANSWER THE CALL because you were ill prepared to lead… or unwilling to take on the required responsibilities of properly leading… or you where un-willing to make the necessary sacrifices required to lead…  AND other Natural Leaders rose above you to take their rightful place as leaders.

Either way… have several-several seats!!!  Enough with the rumor, lies, endless prayers without actual meaningful works, requests for therapy sessions and excuses.  We SEE the fruit that you bear!

Moving on to Top 5 Special- Special Thanks!!!

2.    Special – Special Thanks to President Trump. Ivanka Trump, Attorney Erin Haney, Attorney Jessica Jackson, Cut 50, Buried Alive Project Attorney’s (Brittany Barnett, Co-Founder) and the Decarceration Collective Attorney’s (Lead Council MiAngel Cody) for training Kim Kardashian West and working diligently to secure the release of non-violent prisoners… one person, one family at a time!!! I SEE you and I thank you!!!

3.    Special – Special Thanks (once again) to 20 Year old Jaden Smith, the son of Will and Jada Pinkett Smith for donating another Water Box Mobil Filtration System, his second in honor of Ellen DeGeneres. The Water Box Mobil Filtration System can filter 10 gallons of water per minute, which allows citizens without access to clean water to fill up containers full of clean water quickly and in an environmentally conscious, sustainable way. Until a permanent solution to providing clean water to the citizens of Flint is funded and built, citizens can fill up containers full of clean water ever Wednesday and Thursday, from 11:30 AM  to 1:00 PM at the First Trinity Missionary Baptist Church in Flint, Michigan. I SEE you and I thank you!!!

4.    Special – Special Thanks to Christine Michel Carter and Forbes for more accurately redefining the stereotypes of African American Descendant of Slaves Women… their resilience… their work ethic… their determination to persevere… their dedication to and love of family… AND their ingrained, unique, historical proven ability to overcome challenges succeed in life, despite the odds.

5.    Special – Special Thanks to College Board (Administrator of the SAT) for implementing the Environmental Context Dashboard, which is designed (hopefully) to help gauge student aptitude, willingness and ability to succeed collegially, despite the odds.

Culturally speaking, the century’s old use of Terms as a form of communication is directly linked to the development of high level critical thinking skills.  In as much, Critical thinking skills, as learned during the early years of childhood development is a culturally acceptable – normal language development benefit to the community. One should also note that as a prized skill set, Critical Thinkers at every age are often natural leaders who flourish in and outside of the African American Descendants of Slaves Community under a broad array of professions.

In summation, I would like to thank College Board (Administrator of the SAT) for finally looking beyond the standardized test scores of African American Descendants of Slaves, to determine the actual ability of our students to succeed beyond preconceived stereotypes, unfounded judgments and the historically proven ails of this nation.

Moving on to a brand new update feature…

Please be on the lookout for a BRAND NEW SECTION, which features entrepreneurs who have a limited or no marketing budget, resources or connections to promote their business. If you are and entrepreneur and you are helping to advance the African American Descendants of Slaves Community (in some capacity), I see you and look forward to featuring your small business in a future update!!!

Moving on to an update from Judge Walczyk on her long overdue Order….

I have spoken at great length to the Wake County, North Carolina Court, which currently has legal jurisdiction over the cases, but have heard nothing in return and have no additional information to provide.