Here’s a recap, followed by the update…

Here are the unconstitutional circumstances of each of the five orders…

January 5, 2018 Order Denying my Motion to Amend Complaint and Caption.

This Order is designed to prevent me from being able to add all of the Defendants listed in the cases spanning 8-10 years to the Class Action Lawsuit. A judicial decision to refuse to add all of the Defendants to the cases prevents the judges from being able to “see” all of the evidence located in the cases and/or the clear constitutional violations that exist with each of the cases. *It should also be noted that Federal statute require that Judges add all Defendants in a case because citizens have a right to defend themselves against accusations or charges levied against them in a court of law. The filed Motion to Amend Complaint and Caption was simply meant to be a filing formality and not a misguided opportunity for a Federal Judge to decide whether or not Defendants in a case should actually be listed and/or named in a case.

January 5, 2018 Order deferring their decision as to whether or not they will add, join or combine the cases into a Class Action Lawsuit, as required per statute. 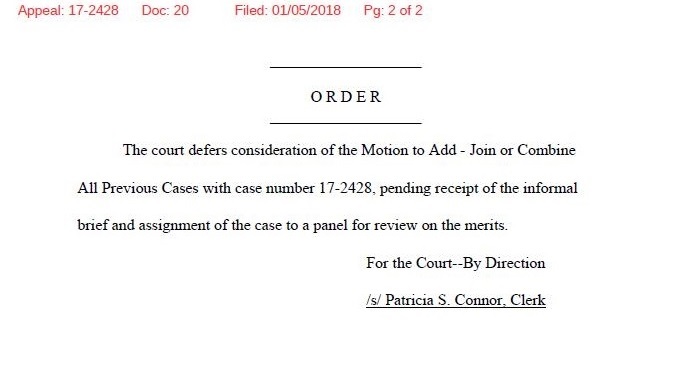 January 5, 2018 Order deferring the Federal Judicial decision on whether they will require State of Georgia Court Reporter, Nanette Hull or State or North Carolina Court Report, Carolyn Richardson to transcribe trial, deposition and hearing transcripts as well as release the accompanying audio recordings of their transcriptions into the Federal Court Record.

It should be noted that the Court Reporters submissions into the lower courts record were falsified. In as much, I submitted a subpoena to request the audio versions of their transcriptions years ago, but the judges overseeing the cases Quashed and/or denied my request to have the audio versions of the Trials, Depositions and hearings released, ignoring requirements per the State of Georgia, State of North Carolina and Federal Statute. 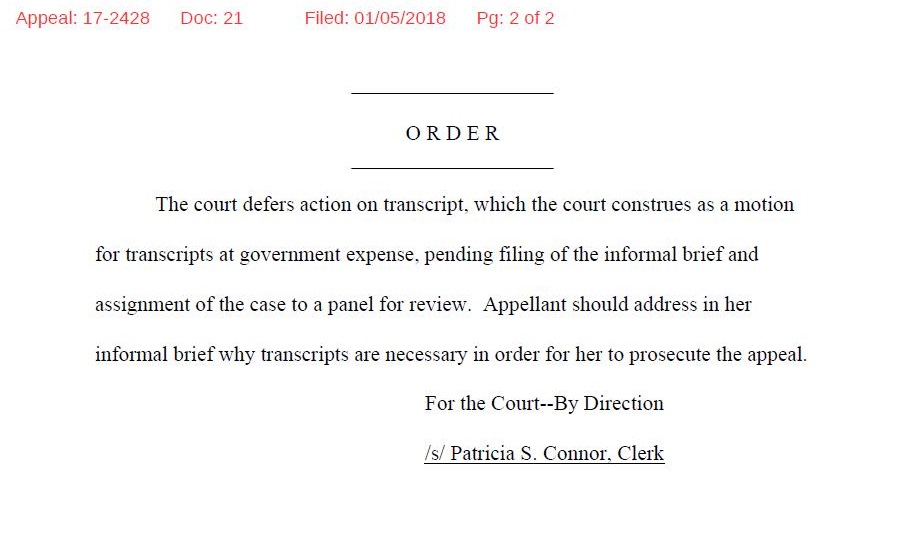 January 11, 2018 Order Denying an exemption from having to pay for PACER Service Fees.

PACER is the “free” public service electronic filing and viewing system that links all Federal Courts. During my second wave of cases, I racked up fees on the account simply by conducting research on the cases and downloading relevant statutes and orders that I needed to include as exhibits in my U.S. Supreme Court case filings. Unfortunately, I couldn’t afford the fees, so the “free” PACER public service shut off my account. It should be noted that at the time, I qualified (via Order of the Court) for In Forma Pauperis due to my level of poverty. With this third wave of cases, I once again qualified for In Forma Pauperis (level of poverty). However yet again, the Court has chosen to deny my request to have the fees related to the use of Pacer services expunged. What this means is that I don’t have access to ANY of the Federal Records. Actually, I have not had the ability to see the Docket and/or what’s in the case record FOR YEARS, which as you can imagine is a disadvantage because minimally plaintiffs and defendants in a case should be able to see or know what judges and Clerks have chosen to include in the record and/or on the Docket. 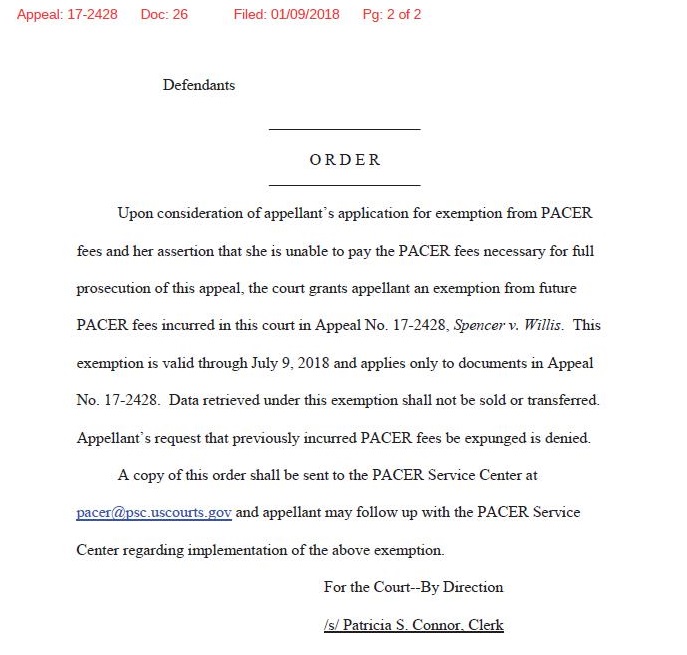 The December 15, 2017, Informal Briefing Order attempts to change the Rules that this third wave of U.S. Supreme Court Cases and/or the Windsor-Spence U.S. Supreme Court cases will be governed by and/or the parameters that the Federal Judges will use to determine the outcome of the Class Action Lawsuit via their Judicial Order. As an explanation, the U.S. District Court is the only Federal Court that has Trial Court permission or ability. All other courts above U.S. District Courts, like the U.S. Court of Appeals and the Supreme Court of the United States of American, are APPEALS Courts… AND NOT TRIAL COURTS. In as much, court cases CAN NOT BE RE-TRIED in ANY of the Appeals Courts because they have already been tried at the U.S. District Court Trial Court Level. Once again. the Double Jeopardy Clause (5th Amendment to the Constitution of the United States of America) does not permit the re-trial of cases. So, here’s what to note. Note that the cases have passed the U.S. District Court level and/or the Trial Court level and NONE of the Defendants submitted any evidence to refute the clear evidence of constitutional violations and/or corruption presented in any of the cases as represented by the Class Action Lawsuit. Again, what this means is that at the Appeals Court level… or the U.S. Court of Appeals Fourth Circuit level, the judges can only look at the evidence presented in the case…

(my evidence and none of the Defendants evidence because they chose not to defend themselves in a court of law, presumably thinking that the Judges could simply pull a backroom deal and/or legal maneuver to erroneously dismiss the cases and/or the Class Action Lawsuit.)

…to determine whether my constitutional rights have been violated. So oddly and illegally, the U.S. Court of Appeals Judges issued the December 15, 2017, Informal Briefing Order to attempt to change the Rules of their APPEALS (not Trial Court) Court to attempt to have the case unconstitutionally re-tried, which is appealable to the U.S. Supreme Court.

Okay, that concludes the recap of the critical Orders issued by the U.S. Court of Appeals Fourth Circuit Judges, which are designed to handicap the cases and/or allow the Judges to use their “Discernment” to determine the outcome of the Class Action lawsuit in their professional as well as a judicial and political favor. 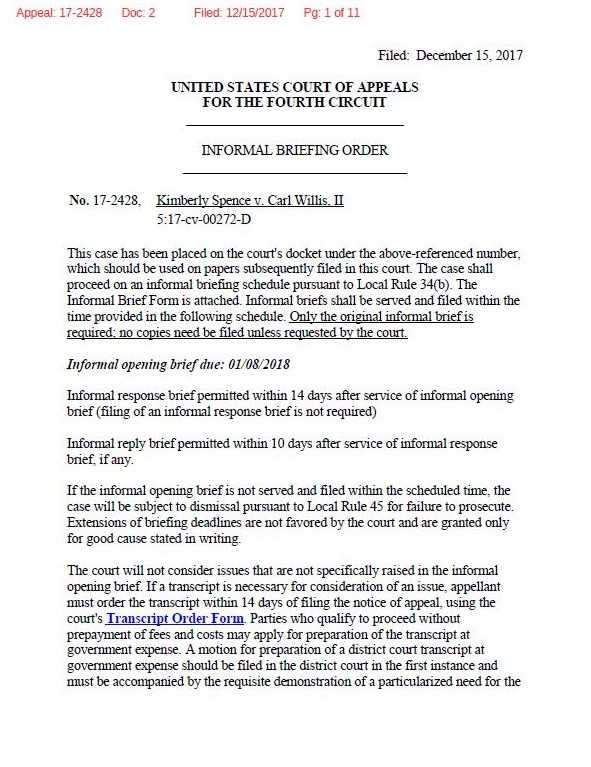 Okay, so now that you understand the Orders, I’m going to provide an update on the status of the U.S. Supreme Court Docket of this third of cases in 8-10 years, the Windsor-Spence Class Action Lawsuit…

In short, the U.S. Court of Appeals and the U.S. Supreme Court Clerks are playing chicken.

Michael Duggan, the U.S. Supreme Court Clerk has sent two notices since January. Thankfully he filed, date stamped and returned the original copies of my U.S. Supreme Court filings, which is what I need…. minimally to keep the cases afloat.

His rationale for returning the cases is that I did not write the words “Petition for Writ of Certiorari” as the document description.

He’s playing word games. He knows that the court can’t return pro se cases (it’s Federal statute) due to document descriptions. Besides all that, I know what I chose to name the document. LOL. I didn’t name the court filing a Writ of Certiorari… because the US Supreme Court Justices (under a Writ of Certiorari) have the right to a choice whether they want to hear and rule on all cases that are titled Writ of Certiorari. Instead, I properly filed a Notice as the document description, which requires that the U.S. Supreme Court Justices hear and rule on this third wave of U.S. Supreme Court cases and/or this Class Action Lawsuit a matter of LAW; when two or more States file questions pertaining to mandated, intervening and controlling questions of law related to constitutional violations.

Michael Duggan knows what I filed, and I know what type of case I properly filed. Michael Duggan and/or the U.S. Supreme Court Justices are simply intentionally stalling the cases. The likely reason is that they are attempting to wait months… years on end to see if I can still qualify for In Forma Pauperis and/or the Federal guidelines on poverty. Again, without qualifying for the Federal guidelines on poverty, I previously had to pay (with the other two U.S. Supreme Court cases) $400 per case for filing fees and approximately $4,000 per case for the special printing fees, etc. that the court requires Pro Se litigants to bear. It should be noted that Attorney’s are exempt from exorbitant filing and printing fees because litigants are required to pay for their own filing fees and all pleadings must be filed electronically, which absolves them from having to pay for the absorbent printing and mailing fees required by the court. Again, without qualifying for the Federal Guidelines on poverty, I would be required to pay approximately $4,400 per case TIMES the 22+ cases listed in the Class Action Lawsuit to ensure that this third wave of U.S. Supreme Court cases could be heard and ruled on by the U.S. Supreme Court Justices. Of course, I don’t have that kind of money and of course, they know this. So, presumably what they are doing (again) is simply trying their best to figure out how to stop the cases from moving forward with a series of delays, which begins with the name of the document (Request for a name change from a Notice to a Writ of Certiorari) and ending with whether or not I meet and/or will continue to meet the Federal Guidelines on poverty, as prescribed by In Forma Pauperis requirements.

Here’s some good news… Michael Duggan, U.S. Supreme Court Clerk hasn’t returned my latest In Forma Pauperis; which (again) is the court filing that I was required to complete and submit to the court to prove (income to debt ratio) that I’m poor. 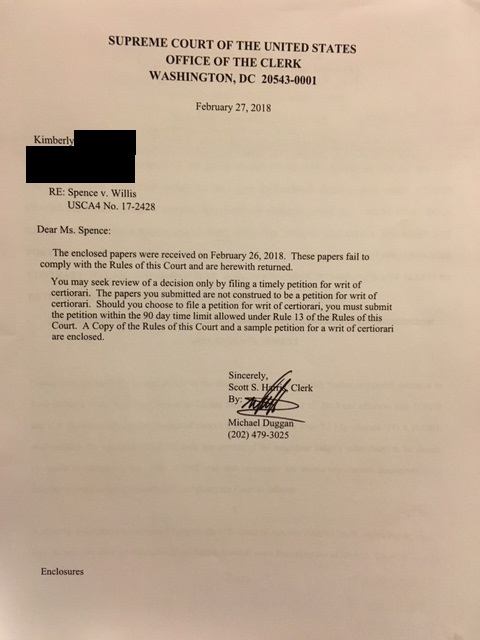 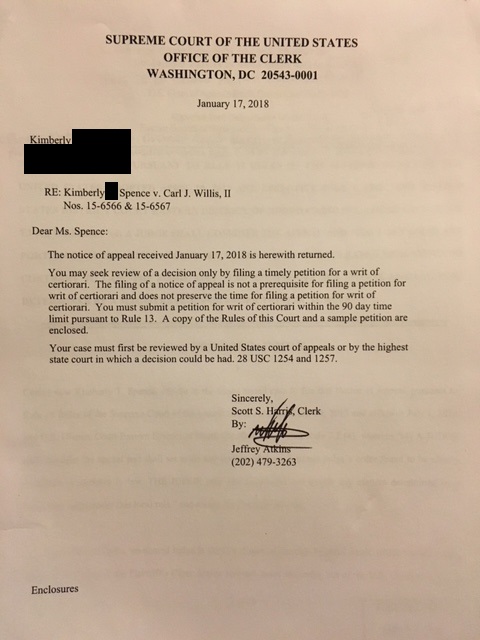 What he didn’t do is include the Recent State of Georgia Case Number on either his January 17th or February 27th return notices and that’s for a specific reason. Once again, he is attempting to have me file a Writ of Certiorari (only one State, entity or case is required to file a Writ of Certiorari) and not a Notice, which requires two or more States to file cases. 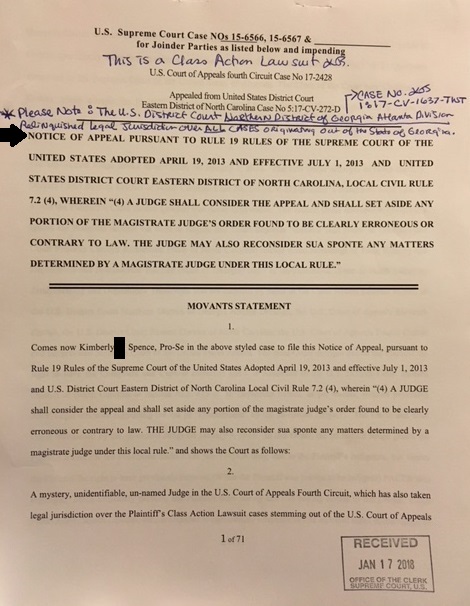 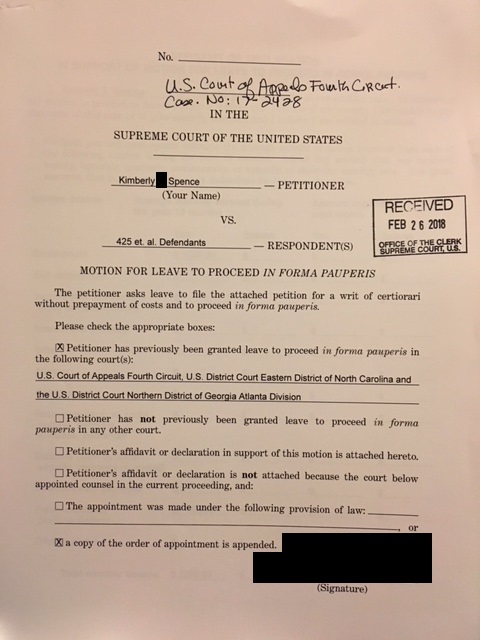 Again, Writ of Certiorari’s are case filings that the U.S. Supreme Court can choose whether or not they want to hear and/or rule on. However, the U.S. Supreme Court Justices are mandated to rule on Notices related to intervening, controlling questions or the law and/or constitutional violations when two or more States file cases. With this third wave of cases, as was the case with the second wave of U.S. Supreme Court cases, one set of cases stemmed from the Federal Court above the State of Georgia and one case stemmed and/or was argued into Federal Court from the State of North Carolina. In as much, the cases in the class action lawsuit represent two separate U.S. District Courts and two separate Court of Appeals with my cases alone, which do not account for William Windsor’s (the second Plaintiff) cases. In summation, the cases more than qualify for Class Action Lawsuit status.

As a remedy to the continuation of frivolous stall tactics, I provided a timely response to Michael Duggan at the U.S. Supreme Court via Fed-ex on Monday, April 9, 2018. The two separate Fed-Ex deliveries, which represent the State of North Carolina and the State of Georgia were delivered to Michael Duggan on Wednesday, April 11, 2018, at 9:00 AM (Attached). A separate electronic filing of the U.S. Supreme Court Filing was submitted to the U.S. Court of Appeals Fourth Circuit for Court Notification and Defendant Service purposes. 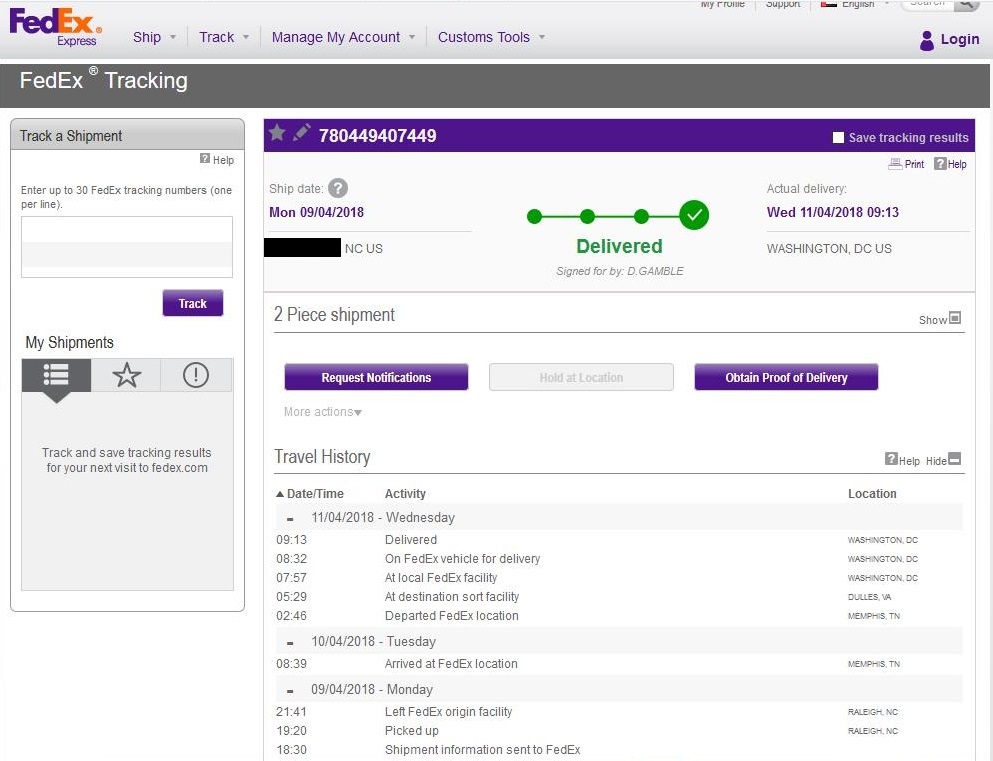 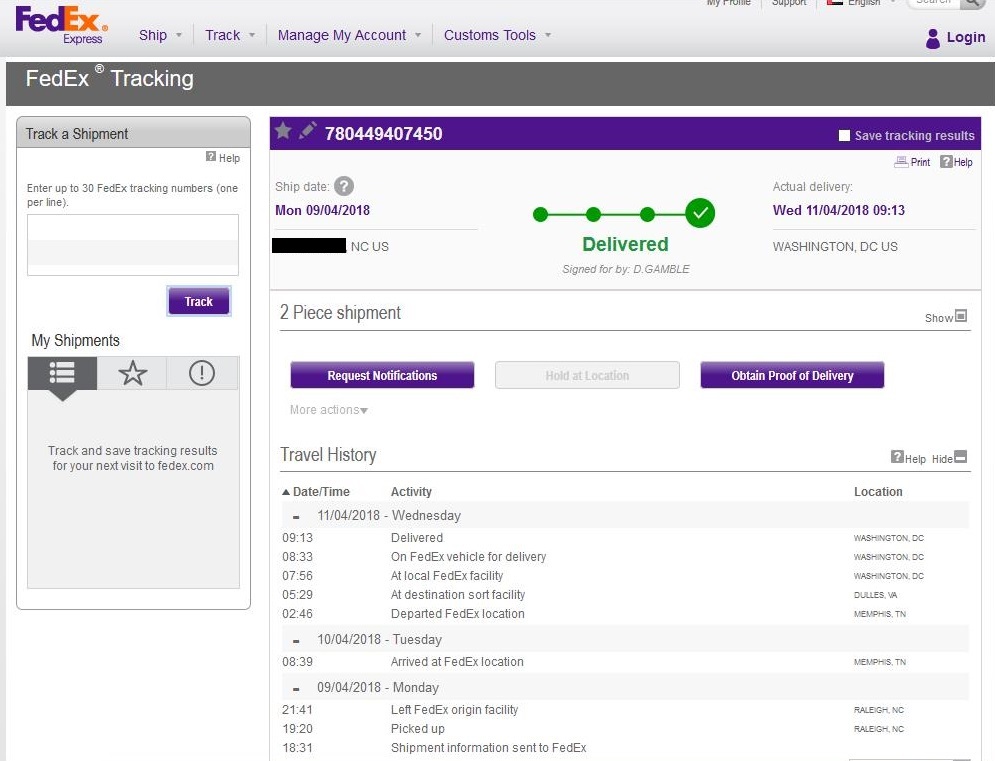